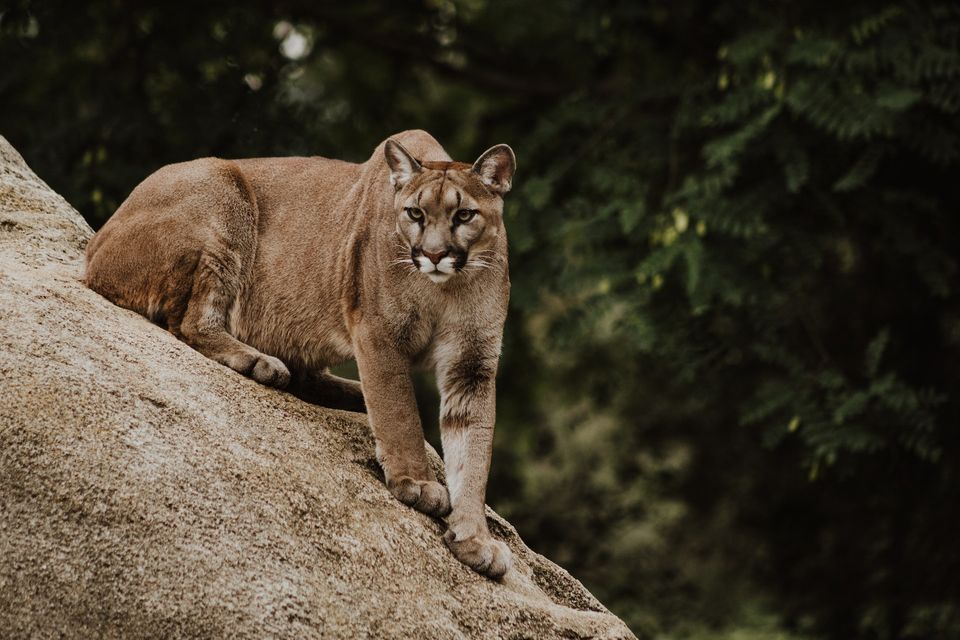 Mountain lions are beautiful, elusive creatures that inhabit the wilderness areas of North America. And according to my dad, they are extraordinarily dangerous animals that are lurking around every corner when you’re out in the wild. But in all seriousness, what do you do if you see a mountain lion while hiking? Let’s discuss.

What Are Mountain Lions?

The first important thing about mountain lions is that they are also known as pumas, panthers, or cougars. So if you’ve been wondering what the difference was between all of those animals, they’re actually referring to the same one.

Secondly, they are very large cats that can weigh up to 200 pounds. They typically live in the western United States but have been known to roam as far east as Florida. Mountain lions are carnivores and typically hunt deer, elk, and moose. However, they will also eat smaller animals such as rabbits and rodents.

Do you think you’ve seen a mountain lion before? Well, turns out my dad was pretty off-base about mountain lions being “everywhere you go” – the total population of mountain lions in the United States is estimated to be between 20,000 and 40,000. To put that in perspective, there are an estimated 750,000 black bears in North America. So while they aren’t as common as other animals you might see while hiking, there’s still a chance you could or may have encountered one.

The majority of these attacks have occurred in California, Colorado, and Arizona. Most of the victims were children or young adults who were hiking, biking, or running alone in mountain lion territory.

Compared to the black bear again, there are far fewer black bear attacks compared to mountain lion attacks. So while most people are quite terrified of encountering a bear while hiking, mountain lions pose a far greater threat. That is, of course, you run into a brown bear (grizzly bear). That’s a different story.

Where Are Mountain Lions Typically Found?

Mountain lions are most commonly found in areas with dense vegetation and plenty of prey. This includes forests, mountains, and canyons. They tend to avoid open areas like meadows or fields.

As far as the United States goes, a majority of the mountain lions are located on the west coast, specifically in Colorado and California. On the east coast, the only state with a growing population of mountain lions is Florida.

So if you’re in New York or Maine and thinking, “Gee, I hope I see a mountain lion while hiking,” you’re probably out of luck.

What to Do if You See a Mountain Lion

If you see a mountain lion while hiking – and the mountain lion sees you, the best thing to do is make yourself as big as possible. Raise your arms and wave them in the air. Make noise by yelling, clapping your hands, or banging on a pot. Making yourself big is a common safety tip for wildlife – but keep in mind, it won’t apply to all animals.

Do not run away, get timid, or turn your back on the mountain lion. This will trigger the animal’s hunting instinct and may attack you. If you are with a group of people, stand together and make sure everyone is facing the mountain lion.

Playing dead is the absolutely wrong tactic to use against a mountain lion. Unlike other animals in the wild, Mountain lions will simply look at you as “weak” and an easy target if you decide to play dead.

If you see a mountain lion and it doesn’t notice you, stay calm and back away slowly. Do not approach the animal or attempt to get a closer look at it.

What Are Signs Of A Mountain Lion While Hiking?

There are a few clues you can look for that might indicate a mountain lion is nearby.

First, keep an eye out for fresh tracks in the dirt or mud. Mountain lions typically have large paws with claws that will show up in the tracks. If you see tracks, see if they lead to a den or carcass – this will give you a better idea of whether or not the mountain lion is still in the area.

Second, look for scat (poop). This can tell you what the animal has been eating and give you an idea of how recently it was in the area.

Third, be on the lookout for trees that have been clawed – mountain lions will often mark their territory by scratching trees.

Finally, keep an eye out for any animals that look nervous or on edge. If the birds are not singing and the squirrels are not chattering, that could be a sign that a predator is nearby.

Although there have been attacks (even fatal attacks), mountain lions typically avoid humans.

Generally, it’s going to be the same as most other wildlife. If you give them space, they will most likely leave you alone. But if you find yourself in between a mother and her cub or if the animal is injured or feels threatened, there is potential for an attack.

Mountain lions are not typically aggressive animals, but they are predators. So if you do encounter one while hiking, it’s important to stay calm and take the necessary precautions to avoid being attacked.

What to Do if You’re Attacked by a Mountain Lion

If you are attacked by a mountain lion, the best thing to do is fight back. Try to use whatever you have – a stick, a rock, your fists – and hit the animal in the face and eyes.

Mountain lions have been known to back down when confronted by a human who is fighting back. So don’t give up, and do whatever you can to defend yourself.

Keep fighting with everything you’ve got until the animal leaves.

Mountain lions are truly fascinating, sometimes scary, and definitely impressive animals. If you’re lucky enough to see one while hiking, take the necessary precautions to avoid being attacked and enjoy the experience from a safe distance.

As always, remember that safety should be your number one priority when out hiking – so if there’s any doubt about whether or not you should encounter a mountain lion, play it safe and turn around! So, how important are hiking boots, anyway? You may have friends who tell you that you absolutely need a pair of hiking boots to enjoy your time on the trails. Then, you have other friends who say they never wear hiking boots and just wear running shoes instead. And then you have those who only…

There are few things more enjoyable in life than heading out to the woods or other natural areas for a hike. Getting away from the constant hustle and bustle of the city can help to reduce your stress and keep your mind calm. Of course, hiking is also a great form of exercise that you… Have you ever hiked in the mountains and realized that your cell signal is, for a lack of a better term, crap? Modern technology in our cell phones offers us a superabundance of help and resources, but even the best advances in modern technology have their limits. There are plenty of people who take advantage… Do you ever find yourself wondering how long it would take to hike 2 miles? You’re not alone! In fact, many people are curious about their hiking speed. But the answer isn’t as straightforward as you might think. The time it takes to hike a mile can vary greatly, depending on your fitness level, the… When most people think about hiking, they imagine spending hours trekking through the woods and scaling steep mountains. And when it comes to hiking 14 miles, you’ll surely be in for a challenge. So how long does it take to hike 14 miles, anyway? In this blog post, we’ll explore the answer to that question…